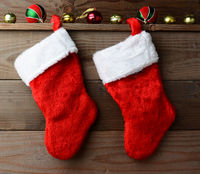 As the holidays creep closer, our Raleigh preschools are planning activities that honor different holiday traditions around the world. Our preschoolers will be decorating stockings on December 14th that will be used all week long to study and celebrate a different tradition. Check out some of the traditions your preschooler will be leanring about in the coming weeks.

Turkey’s “The Poor Man’s Daughters” – This popular legend explains why stockings are hung during Christmas time. The legend goes like this “A recently widowed man and father of three girls was having a tough time making ends meet. Even though his daughters were beautiful, he worried that their impoverished status would make it impossible for them to marry.  St. Nicholas was wandering through the town where the man lived and heard villagers discussing that family’s plight. He wanted to help but knew the man would refuse any kind of charity directly. Instead, one night, he slid down the chimney of the family’s house and filled the girls’ recently laundered stockings, which happened to be drying by the fire, with gold coins. And then he disappeared.  The girls awoke in the morning, overjoyed upon discovering the bounty. Because of St. Nick’s generosity, the daughters were now eligible to wed and their father could rest easy that they wouldn’t fall into lonely despair. While obviously far-fetched, this tale of unknown origin and date is most widely referenced when it comes to the history of the Christmas stocking.”

Our preschoolers will celebrate Turkey’s tradition by putting gold chocolate coins in our stockings.

Our preschoolers will celebrate by putting oranges in our stocking.

Germany’s Candy Canes – In 1670, legend says that the Cologne Cathedral’s choir master handed out sugar sticks to young singers during the Living Creche ceremony to keep them quiet. To honor the special occasion, he had the sticks bent to be “shepherd’s crooks”.

We’ll celebrate this German tradition by putting candy canes in our stockings.

Italy’s Small Toys – Every year on January 6, children in Italy wake up to see if La Befana visited their house. This day in Italy represents the end of the Christmas season, and is also the day that the three Wise Men came to Christ’s manger. Over the years, this day has become more celebrated than Christmas itself.

Our preschoolers will celebrate Italy by putting a small toy in our stocking, like La Befana does for the children of Italy.

The UK’s Christmas Crackers – Christmas crackers became a tradition in the UK around 1845. A sweet maker in London named Tom Smith tried to replicate a French ‘bon bon’ including a riddle in the wrapper as a selling point. When they didn’t sell very well, he sat by his fire place and became interested in the crackles coming from the fire. Thinking it would be fun if the wrappers of his sweets made a crack when pulled in half, he reinvented his crackers. He called his crackers “cosaques” after soldiers who were reputable for riding their horses firing their guns in the air.

We will celebrate the UK by putting crackers in our stockings.

Learn more about our Raleigh preschools

Primary Beginnings has two locations in North Raleigh with five-star ratings. Learn more about our creative approach to educating infants, toddlers, and preschoolers by calling your preferred location or filling out our online form.

Christmas Celebrations Around the World

"Thank you for taking the time out to teach, and sow seeds of goodness into the children. Thank you for always thinking 'What can I do to help the children more?' Thank you for teaching them to respect themselves and others. The lessons are on one accord with what I teach them at home."
Chaka Rosemin Raleigh, NC