Should You Wait to Enroll Your Child in Kindergarten?

There is a growing trend among parents to hold their kindergarten-age child back a year, often called “kindergarten redshirting” or “academic redshirting.” With kindergarten curriculum becoming more demanding and play and discovery time being replaced with more intensive learning, parents worry that their child may not be ready for the more rigorous day. This is especially true for children who may have summer birthdays and will be younger than the other students. Wake County Schools say that children must be five before August 31st to start kindergarten, though they can enroll as late as seven, meaning children with summer birthdays may be starting the school year at the age of four, while other kids are already six.

We know you want to make the right decision for your child, and to help you make the choice, our preschool in Raleigh is sharing some information about starting school on time versus delaying a year. 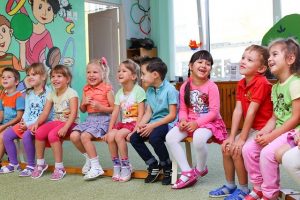 While it may seem like a common practice, and it is certainly becoming more prevalent, only about 4 to 5 percent of children eligible to enroll in kindergarten are “redshirted.” Most of those kids have summer birthdays – June, July, or August – and it’s twice as common to delay enrollment for boys than it is to delay girls. Additionally, this is more common in affluent areas than areas where the mean household income is closer to the poverty line – a California study showed that parents who delay enrollment earn 40 percent more than parents who don’t.

Why Parents Are Choosing to Delay Kindergarten Enrollment

There are several different reasons why parents are choosing to wait a year to enroll their child in kindergarten. It is most often coming from a place of concern – if you’ve heard the phrase “kindergarten is the new first grade,” you’ll know that kindergarten has much higher education standards than it did even a generation ago. Common worries include:

This is certainly understandable, though most studies show that children catch up quickly in kindergarten, and teachers are well versed in ensuring children at all levels can learn, grow, and thrive!

Conversely, other parents want to give their child a “competitive advantage” by redshirting. They hope that by delaying their child’s kindergarten enrollment, they will perform better academically and athletically, and thus be on a more positive trajectory throughout their school career. Multiple studies have been published showing that after the first few years of elementary school, any “advantage” from starting later does diminish over time, so while some parents may think waiting a year will lead to higher test scores and college acceptance, there’s no proof of this.

Should You Delay Sending Your Child to Kindergarten?

There isn’t one for-sure answer as to whether it’s right to delay kindergarten. It really depends on whether you, as a parent, feel your child is ready, though some questions to ask yourself include if your child can:

Those are just some guidelines to consider. If you truly aren’t sure what decision is right, speak to your child’s pediatrician or the school to determine readiness.

If you do choose to wait to send your child to kindergarten because you feel they aren’t ready, it’s important to determine what the next year will look like. If you’re concerned about communication delays, talk to your child’s pediatrician about a speech therapy referral or other type of support.

If your concerns are regarding social development, maturity, and focus, your child would most likely benefit with an extra year of a preschool program (or to begin one), especially if they are on the younger side. This way, they’ll continue to learn necessary school skills in a supportive, nurturing environment. By the end of the year, they should be ready to move on to school ready to take on kindergarten!

At Primary Beginnings, we offer a 5-star preschool that blends cognitive skills with social skills in a fun, caring environment so they can thrive in a kindergarten environment. We have two preschools in Raleigh to choose from to better suit your family’s needs. Contact our Spring Forest Rd school at 919-790-6888 or North Hills Drive at 919-785-0303 today or fill out the form below to get started!

Transitioning Your Preschooler to Kindergarten

Ways to Keep Your Preschooler Learning Throughout Summer

"I feel really comfortable with leaving my infant son in the care of his teachers at Primary Beginnings."
Tonisha Warren Raleigh, NC