February is National Canned Food Month, a month dedicated to the history, safety, and benefits of canned foods. 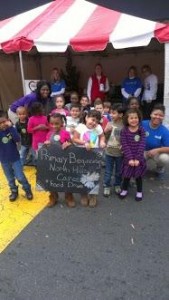 Our preschoolers at the Raleigh food bank last year!

“Canning” began around 1809 during the Napoleonic Wars to help preserve large amounts of food for French soldiers. The food was originally placed in glass jars, however tin or wrought-iron canisters (shortened to ‘cans’) were later used.

Updated manufacturing processes and technology have helped to ensure the safety, quality and nutritional value of canned foods, providing a variety of food options at affordable prices.

Benefits of Canned Food for Preschoolers

To celebrate National Canned Food Month, we’ll be running a canned food drive at both of our preschool locations. Parents and students can bring in their canned vegetables, fruit, soup, etc. throughout the month to help fight hunger in the Raleigh-area.

We’ll be taking the donations to our local food bank on February 27th. For more information about the canned food drive, please contact your preschool center.

Learn more about our preschool and February calendar, then request a tour of one of our Raleigh child care centers!

"My daughter has really enjoyed her teacher and her class. She had a very easy transition from her home care to her care at a real school."
Cherice Boylorn Raleigh, NC